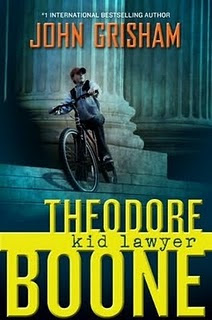 Does your child want to be a lawyer?

Does he negotiate bedtime like Alan Dershowitz? Does he want to put the bad guys behind bars?

If this is your kid, then you need to buy John Grisham’s new book for young adults, Theodore Boone, Kid Lawyer.

Grisham has written 22 books for adults, mostly about the small-town lawyer up against the baddies. His books are legal thrillers, packed with the real-world details that only an author who used to be a lawyer can provide. They’re quick reads with lots of action.

This book is Grisham’s first attempt at a young adult novel, and it’s kind of like his other books – only a lite version.

In trying to write for a younger audience Grisham faces some challenges. There’s a lot of legal stuff he has to explain, which comes off either sounding like a lecture or being condescending. And any exciting tension he builds up between the bad guy and our hero fizzles out because his normal fight/chase scene would be too scary for this audience, so he has to pull all of those punches. It ultimately becomes confusing for the reader, who wonders what all the fuss was about. Also, the main character isn’t very well-rounded; he’s a likeable enough kid but too two-dimensional and perfect to believe.

Having said all that, however, there is a fair bit of action in the book, it's well-paced and it centres on a good moral: that people are innocent until proven guilty.

I’m not going to review the book here, because Kate at Book Aunt has written everything that I would have said about it – the good and the bad. So do read her review.

If you’ve got a child who is interested in the law, or becoming a lawyer, then definitely get this book.

If your kid wants to be a baseball player or a ballerina (or anything else), take a pass on this book and wait for the sequel that is sure to come – there’s an enormous cliffhanger at the end of the book, so presumably there will be a second one. And I’m hoping it will be more firmly edited and more appropriate for its audience.

Overview of Theodore Boone, Kid Lawyer
Theo, 13, is a straight-A student whose parents are both lawyers. He loves everything about the law; he’s got a dog named Judge. Kids at school come to him with their troubles (parents getting divorced, pets in the animal pound, etc.) and he hacks into the Lexis-Nexis system at his parents’ office to give his friends legal advice.

One day a murder is being tried in his small town. Theo gets mixed up in it and must decide when to bring in the adults, as what he knows about the case gradually becomes pivotal to the prosecution.

The website for the book, http://www.theodoreboone.com/, has a few things for educators and parents including a teaching guide and a three-minute video of Grisham talking about the book.

Is it a good book? I'm not sure. I did enjoy reading it, but so much of it went "klunk" that it was hard to decide if it's a worthwhile read. Certainly for kids who are struggling with reading (unless they love the law) I'd give it a miss. I'm going to keep my eye out for the second Theodore Boone book and I'll keep an open mind. And fingers crossed.
Posted by Joyce Grant at 8:01 AM