A book about Me.

For a child, the most exciting thing to read about is - himself.

One of the best ways to get a child excited about reading is to give him a book that he opens to discover it's all about him. What could be better?

And it's really simple to do. (This isn't one of those "scrapbooking, super-mom" projects.) I found this mini-scrapbook at a Goodwill for about a dollar, but you can get them at Chapters/Indigo as well.

Then, I picked out 10 of my favourite photos and taped them onto every other page. The pictures were mostly about my son's favourite activities, his friends and relatives, or places we'd been. 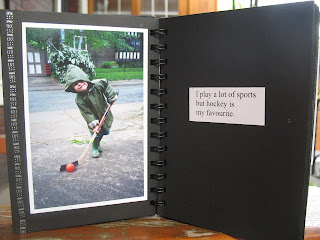 I made captions in Word - using a large font - cut them out and pasted them in place. I didn't complete the whole book at once. I did as much as I felt like doing, and then I gave it to him for his birthday. For his next birthday, I added another chapter to the book.

I used age-appropriate language and words, keeping it very simple at first ("I am two years old.") and using slightly longer words as he got a bit older ("...hockey is my favourite.").

When he was very young, we read the book together. Eventually, he memorized it and could "read" it himself. Later, he was able to read new entries all by himself. Being very familiar with the content of the photos helped him figure out what the captions said, and made his guesses about the words much more accurate. (Beginning readers make guesses about some words at first, and later begin sounding them out.)

It's been about four years since I worked on this one, but I'm planning on doing a new one for next Christmas. It will have more complicated captions and words, commensurate with the way he's reading now.

But the most important thing won't change - it will be all about him.
Posted by Joyce Grant at 9:48 AM

I love it!! It's creative but not (as you wisely point out) beyond the time and/or efforts of average-mom (versus mythical super-mom!)

And it's so true: many kids would be thrilled to read the *simplest* book about themselves. Most moms probably think the project should be grand and huge and...and....they *so* don't have time for that! A chapter a year should be doable.

I look forward to reading this blog in the future!

I love this idea! I'm going to do it for my granddaughter for Christmas. She's only 14 months, so I think it's a great time to start.

Hopefully, I can keep it up year-after-year.