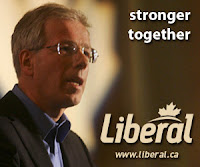 Not just the words themselves, but what everything on an election sign means. My son and I discussed the concept of the "incumbent," sparked by the word "re-elect" on a sign we saw. Check out an election sign, and talk to your child about the various elements including the slogan, logo and other messages, verbal and pictoral.

Three-minute discussion topics:
*Each party uses a different colour.
*There are five people who want to be PM.
*Who is the Prime Minister right now?
*Where our family will vote, and when.

Slightly longer discussions:
*The differences between the parties (left-wing, right-wing).
*Federal vs. municipal elections.
*Each party has a set of ideals.
*The election in the States (who is President now, and who wants to be President).

I'm not pushing any specific political party - I tried to get a generic sign but it's harder than you think. In the end, I just downloaded this one from the Liberals.
Posted by Joyce Grant at 2:08 PM