Why I love the library: Part I 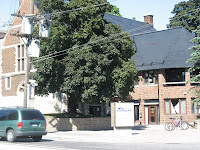 There are so many great ways to enjoy the library.

This post is the first of many, as I share with you a love of libraries. Being enthusiastic about libraries rubs off on children, and the library can become a place where kids feel comfortable and empowered.

When my son was about three years old, I was, like many new mothers, exhausted. I wanted to go to the library, but how? My son didn't want to go (and I didn't need a war on my hands), and I knew that it would just end up being work for me, as I reshelved the books he got down - never mind finding time to browse.

Here's how I solved it. The library has computers! And they have a half-hour time limit. So I would tell my son, "Let's go to the library." (Screaming, whining.) "You can use the computer for a little while." (Zoooom! - coat on, shoes on.)

He always understood that when the computer shut off, that was it, time to go - I never gave him "another" half-hour. During that 30 minutes, I could browse the children's books to my heart's content. He would go on the very kid-friendly and educational TVO website. The added bonus was that he got to use a computer - but not mine.

And after the library computer shut off, I would let him pick out some books, and we would check them out together. He got familiar with the people and the layout of the library, and began to understand how it all worked and to feel like it could be his place, too.

We also do a ton of other things at the library, so there's not much danger of my son seeing the library only as his "computer arcade." Still, I respect other parents' views on computers and not allowing their kids to use them until they're older. I'm just saying this was something that worked for me. I welcome your comments!
Posted by Joyce Grant at 6:00 AM