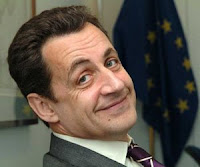 Another way in which the French are awesome.

When kids in France turn 18, the government will give them a free one-year subscription to a newspaper of their choice, President Nicolas Sarkozy announced Friday.
The free subscriptions are designed to instill in young people the habit of reading the news regularly. Apparently, there are fears that the younger generation isn't as into daily newspapers as their parents and grandparents.
With falling ad and subscription revenues, it's hoped that the move will help boost the French economy.
What a great idea. I love it when economics and literacy collide. Oh Mr. Harper...?
I got this picture of N.S. by Google Image-ing him. It's from Foreign Policy magazine. It's such a great shot. Can you imagine our leader looking this spritely, this charming? Ya gotta love the French.
Posted by Joyce Grant at 8:25 PM

I'm sure I'd already commented on this entry, but checking your blog this evening I see "0 comments" listed.
That's odd.
Any idea what may have happened?